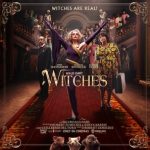 As Halloween beckons, summon up favourite child-friendly frighteners such as The Witches, Beetlejuice and CoralineHowever much adults latch on to it as an excuse for partying and dressing up, Halloween remains, in its present-day incarnation, an occasion chiefly for the benefit of children: try trick-or-treating without one in tow and see how far you get.

Yet film distributors don’t see it in quite the same way.

This week’s suitably spooky cinema releases, from Last Night in Soho to Antlers to The Nowhere Inn, are all for adults and older teens.

Warner Bros has taken advantage of the gap to at least rerelease the first Harry Potter film in cinemas, but otherwise, families seeking a bit of gentler fright-night viewing are better cosied up at home, where you can at least pause proceedings whenever things get a little too intense.Because as much as many parents prefer their

Upcoming Liam Neeson Movies To Keep On Your Radar

Bridgerton Season 2 First Look: The Regency Romance Is Steamier Than Ever