May the odds ever be in our favor as the long-awaited “Hunger Games” prequel film headed for theaters.Based on Suzanne Collins’ novel “The Hunger Games: The Ballad of Songbirds and Snakes,” the origin story behind the world of viral “The Hunger Games” series is revealed. Jennifer Lawrence, Liam Hemsworth, and Josh Hutcherson shot to fame […]

After two seasons of “Euphoria,” Hunter Schafer is no stranger to captivating make-up looks, but here’s hoping she’s prepared for how weird things can get in the Capitol. Schafer is graduating from high school drama to pure dystopian chaos by joining the cast of Lionsgate’s “Hunger Games” prequel, “The Ballad of Songbirds and Snakes.” The […]

Josh Hutcherson is my favorite kind of movie star. While most of the world knows him for his starring role as Peeta Mellark in “The Hunger Games” franchise, he also lends his talents to weird and adventurous genre films like Joseph Kahn’s criminally underrated “Detention,” and the ridiculously fun “Tragedy Girls.” The short king was put through the […]

Both projects featured at CinemaCon and will be released by Lionsgate in the US.Lionsgate International is understood to be bringing Hunger Games prequel The Ballad Of Songbirds And Snakes and the long-awaited Dirty Dancing sequel to the Cannes market in a few weeks.Lionsgate did not respond for comment however sources have indicated Helen Lee Kim […]

Upcoming Jennifer Lawrence Movies To Keep On Your Radar

If you’ve been looking for a Jennifer Lawrence fix, you’re in luck. The star spent the last two years on hiatus, which seems well earned considering the breakneck speed with which she tackled some of the biggest Hollywood projects over the last decade. In the early 2010s, Lawrence averaged around three films per year. After her […]

Suzanne Collins‘ The Hunger Games prequel is finally being released this year, and Lionsgate is already poised to turn it into a movie. The original trilogy began with the 74th annual Hunger Games, but this story is set 64 years before that – ten years into the Capitol of Panem’s oppressive rule, which is driven […]

Today, Scholastic announced that it is publishing Suzanne Collins’ new Hunger Games prequel novel, currently untitled, which will hit shelves on May 19, 2020.The novel will be set in the world of Panem 64 years before the events of the original Hunger Games trilogy on the morning of the reaping of the 10th Hunger Games.“As […] 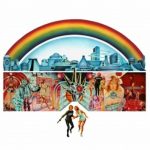 The Hunger Games screenwriter Peter Craig is ready to dabble in one of the properties that inspired it. Warner Bros. has tapped Craig to work on Logan’s Run, The Hollywood Reporter has confirmed. The remake of the cult classic 1976 movie has long been in development, with X-Men: Dark Phoenix director Simon Kinberg set to helm […]

Moulin Rouge! Nearly Had A Very Different A-List Lead In Place Of Ewan McGregor
When Hayden Christensen Got Cast As Anakin Skywalker, He Celebrated Like A Star Wars Fanboy
Here’s How Andor Season 2 Will Lead Into Rogue One: A Star Wars Story
Paper Girls Trailer: The Acclaimed Sci-Fi Comic Heads To Prime Video
If It Weren’t For John Wayne, We Might Not Have John Wick
What Does That Final Season 4 Scene Mean For The Future Of Stranger Things?
James Cameron Blasts ‘Trolls’ for ‘Avatar’ Hate, ‘Whining’ Over Runtime
‘Avatar 2’: James Cameron Compares Franchise Development To Writing ‘Lord Of The Rings’ Novels
The teens disrupting Minions screenings might actually be the saviours of cinema
Corrective Measures review – Bruce Willis flexes his mind control in superpowered prison drama
Futura review – Italian teens discuss their lives to come in subtle and complex study
‘Frankly it blew my mind’: how Tron changed cinema – and predicted the future of tech
Here’s How That Epic Stranger Things 4 Guitar Scene Came Together
Sam Raimi Convinced Kevin Feige Not to Cut This ‘Corny’ ‘Doctor Strange in the Multiverse of Madness’ Scene
The 14 Best Mad Men Characters, Ranked
Jessica Chastain Slams Hypocrisy of ‘Independence’ on the Fourth of July After Roe v. Wade Overturn
The Daily Stream: The Bad Guys Dares To Try Something Different
James Cameron Says He May Not Direct ‘Avatar 4’ & ‘5’ Himself
Downton Abbey: A New Era Stars Jim Carter And Raquel Cassidy Had A Blast Filming The Big Dinner Scene [Interview]
How Stephen Lang’s Colonel Quaritch Returns In Avatar: The Way Of Water