‘Army of Thieves’ Trailer: ‘Army of the Dead’ Prequel Is ‘The Italian Job’ with Zombies 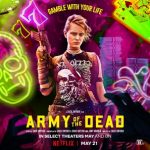 Netflix’s zombie smash hit “Army of the Dead” has a prequel coming this fall from the original film’s star, Matthias Schweighöfer.

He’s the director and star of “Army of Thieves,” the set-up film to Zack Snyder’s wildly popular zombie movie.

Schweighöfer plays small-town bank teller Dieter, who gets drawn into the adventure of a lifetime when a mysterious woman recruits him to join a crew of Interpol’s most wanted criminals attempting to heist a sequence of legendary, impossible-to-crack safes across Europe.

Watch the official trailer below before the movie arrives on the streaming platform on October 29.The screenplay comes from Shay Hatten, who co-wrote “Army of the Dead” with Joby Harold.

Producers are Zack Snyder, Deborah Snyder, Wesley Coller, Dan Maag, and Schweighöfer, from a story developed by Snyder and Hatten.

Edgar Wright: how Martin Scorsese helped me through lockdown

London’s Soho on screen – from Peeping Tom to Mona Lisa

Dune review – sci-fi epic gets off to a flying start