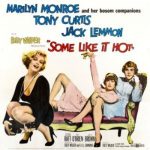 Andrew Dominik had to convince MGM to let “Some Like It Hot” be part of “Blonde.”Much like Quentin Tarantino’s 2019 Oscar-winning “Once Upon a Time in Hollywood,” Dominik’s “Blonde” includes real footage from Marilyn Monroe’s filmography.

Yet lead star Ana de Armas is placed in the films, including “All About Eve,” “Some Like It Hot,” “Don’t Bother to Knock,” and “Niagara.” The iconic “Diamonds Are a Girl’s Best Friend” scene from “Gentlemen Prefer Blondes” is also recreated by de Armas.

“Blonde” is now in theaters and premieres September 28 on Netflix.Writer/director Dominik revealed that it was difficult to get permission to use snippets from Monroe’s films, especially the MGM-owned classics.“The hardest things to get were permissions.

So, I put ‘Ana in All About Eve,’ for example, and in ‘Some Like It Hot,’ and we use a bunch of Fox movies,” Dominik told Deadline.

‘Avatar: The Way of Water’ Early Reactions: James Cameron Has Done it Again

Puss in Boots: The Last Wish Review: A Purr-fect Comeback